Everyone Matters and Benslow Music take delight in their joint project “Performing for Hitchin” where amateur and professional musicians rehearse together in the cheerful ambience of Benslow Music before offering concerts to care homes around the district.

After a spate of lockdown cancellations violinist Martin Smith and clarinettist Margaret Archibald take especial pleasure in presenting a dance programme that includes jigs, reels and hornpipes from the British Isles, sevdah from Bosnia, genteel minuets from Vienna and wild tango from Argentina.

“Dancing round the world” live-stream is part of Benslow Music’s celebration of Make Music Day 2021 (21 June) and the dance theme was inspired by a wheelchair dance event for Leonard Cheshire in Hitchin that sadly had to be postponed.

In place of live concert visits Benslow Music is also making a series of streamed concerts freely available to care homes as part of a special Make Music Day festival in June.

Martin and Margaret met as members of the London Mozart Players sometime back in the late 1980s and discovered a joint passion for taking music out into the community, developing a range of projects together during Margaret’s 21 years as Education and Community Manager for the LMP and during the decade since 2010 when she set up the charity Everyone Matters. Together they have performed informal concerts in care homes, day centres and lunch clubs, presented hands-on music-making workshops in schools for children and young people with special needs, joined forces with school and amateur groups for intergenerational projects and presented lecture-recitals.

Martin Smith has played with most of the UK’s leading chamber orchestras including many guest appearances as leader and soloist, is active as a conductor and is artistic director of the Enfield Chamber Orchestra and the Richmond Orchestra. Margaret Archibald has toured the UK, Europe, USA and Japan with modern and period instrument orchestras, combining performing, recording and teaching with her role as Artistic Director of Everyone Matters. 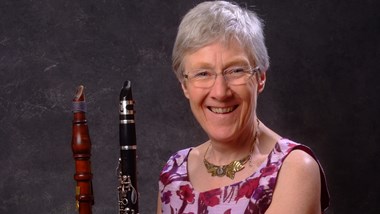