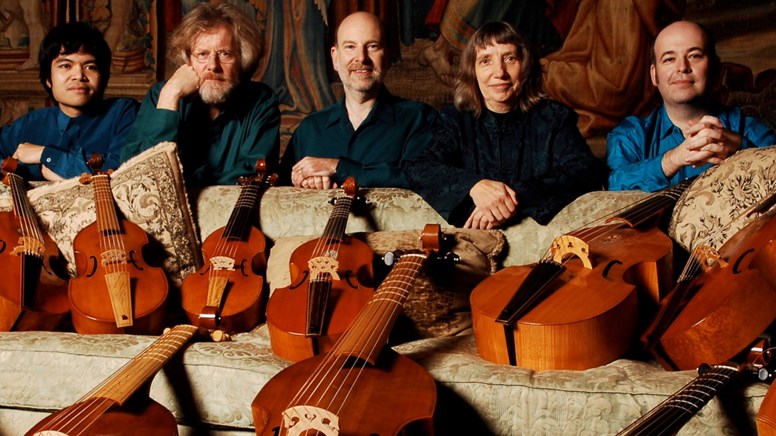 The Rose Consort of Viols takes its name from a famous family of sixteenth-century viol makers, whose instruments coincided with the growth of English consort music. With its unique blend of intimacy, intricacy, passion and flamboyance, this music ranges from Taverner and Byrd, to Lawes, Locke and Purcell, and forms the nucleus of the Rose Consort’s programmes. For nearly four decades the Rose Consort has been delighting audiences across the UK, Europe and further afield. It has performed in London’s Wigmore and South Bank Halls, is heard regularly on the BBC, including a Prom concert from Cadogan Hall, and makes frequent appearances at the London International Exhibition of Early Music and York Early Music Festival. It has performed at Festivals in Canada (Festival Vancouver) and the USA (Boston, New York, Boulder, Portland, and Seattle), and also featured as a guest ensemble at the Pan-Pacific Gamba Gathering in Hawaii. It has also performed with the choirs of Chichester Cathedral and Oslo Cathedral, as well as at festivals in Bratislava, Nuremberg, Cologne and in Austria. The consort has received awards for research and performance of specially devised programmes, and has also commissioned and performed new pieces for voices and viols by Judith Bingham, John Woolrich,and Ivan Moody. The Consort has appeared at Dartington International Summer School, giving concerts and coaching ensembles, activities it now continues here at Benslow Music in Hitchin.

John Jenkins, the leading English composer of instrumental music during the mid-seventeenth century, performed at the Stuart court and spent much of his later years working for Royalist families in East Anglia. Much loved for its tuneful grace, his music was widely copied and performed by those who chose to ‘fidle at home’ rather than be harmed during the Civil Wars. Tonight, Jenkins’ delightful ayres, pavans and fantasias for viols are interspersed with pieces by Tallis, Byrd and Strogers, Elizabethan composers who established the fantasia style, dances and fantasias by his more extravert contemporary William Lawes, and by the extraordinary ‘Fantazia upon One Note’ by his successor Henry Purcell.

Jenkins: Fantasia No.5 a6 in d

Jenkins: Fantasia ‘All in a Garden Green’

Purcell:  Fantazia Upon One Note