"Those cares that do arise from painful melancholy": Depicting disaffection in the English madrigal 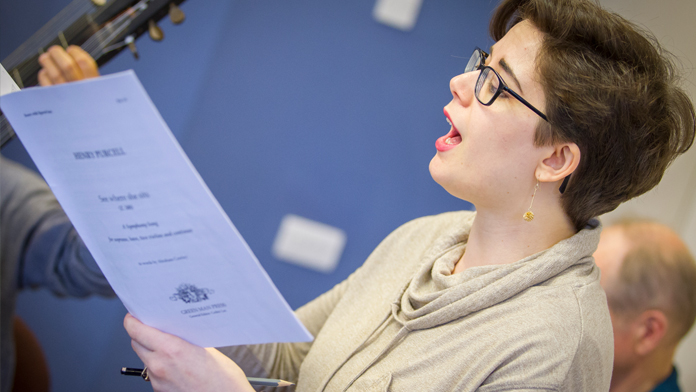 "On Sunday 13 of October a merry group of singers came together at Benslow Music in Hitchin to weep and lament musically in Elizabethan melancholic style. Dr Clive McClelland (Associate Professor of Music at Leeds University and Director of the Leeds Baroque Choir) introduced us to the lovesick melancholic, a stock figure in Elizabethan and Jacobean poetry and song. This sad gentleman weeps, sighs, laments and dies (the latter in two senses of the word.) He is ‘ordinarilie out of heart, alwaies fearfull and trembling’ (Laurentius: A Discourse on the Preservation of Sight, 1599) but ‘must learn to sing and dance, play upon some instrument or other...if he be truly touched with this loadstone of love.’ (Burton: The Anatomy of Melancholy, 3rd edn 1628).

We focussed on four melancholy madrigals: Bennet: Weep O mine eyes; Tomkins: Too much I once lamented; Ward: Out from the vale and Wilbye: Draw on sweet night [all to be found in The Oxford Book of English Madrigals, OUP 1978]. Madrigals in the ‘melancholic’mood contain ‘sigh motifs’, suspensions, falling phrases, flattened leading notes, unusual key changes and delayed cadences. I was surprised that some pieces contained ‘fa la la’ sections with short notes encouraging the lover to forget his sighs.

We sang the best known of these madrigals, Weep O mine eyes which is in four parts (SATB), reading the full score from The Oxford Book of English Madrigals. However, this was not how it was sung in the 16th and 17th centuries. We were given a brief tutorial on Elizabethan pronunciation and then sang the same madrigal using different vowel sounds and separated syllables with mixed results! We were encouraged to work at our Elizabethan pronunciation throughout the day and became more confident until we encountered unknown pieces such as Out from the vale (in 6 parts) when it was imperative to concentrate on the notes and the rhythms resulting in words that should have been known to Elizabeth I sounding very similar to words known to Elizabeth II.

This music was sung in domestic settings and the madrigals were published in ‘Part Books’. We were given pages of Weep O mine eyes copied from one such book and sang from them; soprano, alto, tenor and bass each had a sheet with their own part on it rather than the full score as printed in the Oxford Book. It was necessary to look at and listen to each other with greater concentration and counting became even more essential as this music had no bar-lines and, like the original singers, we had no conductor.

Reverting to modern printed music (and a conductor) we sang the other madrigals and Orlando Gibbons' well-known and beautiful Silver Swan. I had not heard of Ward and barely of Tomkins but will now seek them out - wonderful composers. Once the notes and rhythms were (by and large) correct, Dr McClelland encouraged us to make music meaningfully, emphasising important words and phrases. It was a triumphant end to an inspiring and educational day."