The Primrose Piano Quartet was formed in 2004 by four renowned chamber musicians and is named after the great Scottish violist, William Primrose, who himself played in the Festival Piano Quartet. The group's acclaimed discography includes favourites such as works by Fauré, Brahms, Elgar, Strauss and Schubert as well British repertoire featuring neglected masterpieces of the 19th and 20th century and major commissions from Sir Peter Maxwell Davies and Anthony Payne (premièred at the Cheltenham Festival and at King's Place London).

The Quartet enjoy a busy performing schedule throughout the UK and abroad with recent tours taking them to Denmark, Germany, Romania, Portugal and Bulgaria in addition to regular appearances at London's Kings Place, Wigmore and Conway Halls.

In 2019 the Primrose released their latest recording, this time of the complete Brahms piano quartets. This was the culmination of years of research into Historically Informed Performance Practice and involved the musicians and recording team travelling to Vienna to record in the historic “Ehrbahrsaal”, where Brahms himself frequently performed, using three different pianos of the period from the famous Gert Hechner collection. The result has been hailed by critics as “revelatory”.

Their own festival in West Meon, Hampshire is now in its eleventh year, and they were appointed ensemble-in-residence at the Battle Festival in 2016.

In this performance Kirsten Jenson replaced cellist Andrew Fuller who was recovering from surgery.

Martinů: Madrigals for violin and viola 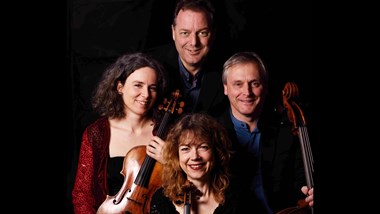