A rare species of Broomrapes have been found in our gardens.

Despite their slightly threatening name, Broomrapes are fascinating and distinctive plants. Often overlooked, some species are quite scarce, so it’s very exciting to have found a big colony of Ivy Broomrapes (Orobanche hederae) in the gardens at Benslow Music in Hitchin. This species is nationally scarce; it’s officially rare in Hertfordshire where it’s only been recorded at five sites, of which two are private gardens. The population at Benslow Music gardens, at least 130 plants, brings the total up to six locations in the county.

Broomrapes are never green, having no chlorophyll, so they have the freedom to be all sorts of colours: they can be cream, yellow, scarlet, purple or blue! They get all their sustenance (water, minerals and nutrients) by parasitising other plants. Consequently, they don’t bother with proper leaves either, having only ‘scales’ on their stems.

The members of each species are very variable both within and between populations, often making them hard to identify. For example, the Ivy Broomrape can be “…slender to stout… yellowish, yellow-brown, brown or reddish… The stigma is golden yellow, dark yellow, light yellow, orange or reddish yellow, dark brown later”.

Different Broomrape species parasitise a variety of ‘host’ plants. Germination of a Broomrape seed is stimulated by chemicals exuding from the roots of the host plant - Ivy, in this case. The young seedling then sends out a rootlet (haustorium) which penetrates the Ivy’s vascular system and allows the Broomrape to grow. The plants are annual or sometimes perennial, and the best time to see them in full flower is May to August. They are growing in the gardens of The Lodge, easily spotted from Benslow Lane, and beside the main driveway.

How did these Ivy Broomrapes, rare in the wild and most often found on coastal cliffs and hedgebanks, appear in the gardens? A little sleuthing allows us to speculate. Andrew Smart, the gardener, who’s worked here for over 20 years, says he didn’t sow them. However, he did plant the Ivy about seven years ago and he’s noticed that the Broomrapes have been spreading in recent years. When Ivy is planted, Ivy Broomrape seeds or tissue may already be lodged in the roots. That may account for the surprising appearance of so many of these flowers in Benslow Music’s gardens.

A record of the Broomrapes will be submitted to the online database of the Hertfordshire Natural History Society.

If there were a piece of classical music to capture the essence of these mysterious plants, I’d suggest Nuages from Debussy’s Nocturnes - it’s suitably strange and dramatic for a plant whose Latin name, Orobanche, derives from the Greek word ἄγχω (ankhō), meaning to strangle! 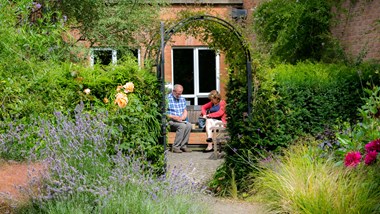 Gardens
Our beautiful gardens are an integral part of the Benslow Music experience and provide an inviting space in which to relax and re-gather energies between sessions.